Pete Beach, providing over 50 charter vessels in the Tampa Bay Area. Dan has sailed extensively throughout his life. Dan is actively involved with multiple community, state, and national associations. He is a past president of the Tall Ship Society and of Skal International Tampa Bay, where he currently serves on the board of directors. In he created the c 3 non-profit S.

Nina is a retired Pinellas County educator and a year resident of St. Pete Beach. Nina travels the world, immersing herself in other cultures. She is also an avid native plant gardener. They discovered, when Art was at the helm, that he relished this chance to feel like himself again, enjoying sailing and life as he had before.

Nina and Art had enjoyed a year friendship with Captain Dan. That friendship and these initial trips are what led to the idea of S. Originally from the Niagara Falls area, Vicki moved to Florida so that she could sail year-round. From Vicki held a variety of positions, including crew, manager of Boating at The Pier, and marketing director for Dolphin Landings. Prior to that, Vicki was a landscape designer. Since , she has published a monthly newsletter, Playing Around the Beaches and the Bays, to educate resort and hotel staff about activities and attractions along the beaches.

Vicki served on the Board of Women in Tourism for 10 years. Photography is her passion, and as part of the original group that took Art, Suyin, and Teddy sailing, she began taking pictures of the happiness she saw during those sails. Vicki always has a camera in hand to capture the memories of families enjoying a time of peace in being together on the water during monthly S.

Vicki is a proud mother of one daughter. After graduation, he worked for General Motors. When the Army drafted him, he was stationed at Arlington National Cemetery. Terry moved to St. 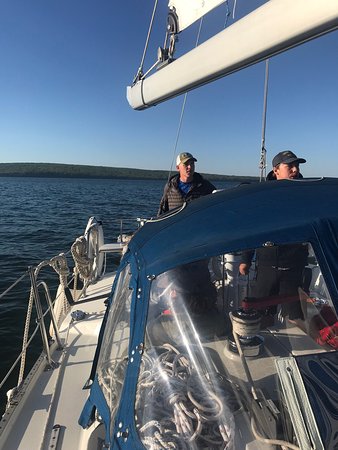 Board of Directors. He was also very knowledgeable about the area. Bronte was great in asking what we wanted to do and adjusting when we changed our mind. We enjoyed our sail out to Michigan Island for the lighthouse tour. The way back the wind had died so we motored the way back, but that can't be helped. The trip was overall, perfect. My youngest now loves sailing and doesn't fear getting on a sailboat!

Thanks Dreamcatcher! Great time sailing with Captain Jen! Not to mention dog sledding! We could do as much or little as we wanted. We would book again! My husband and I had a fabulous trip spending the day on the sailboat!

It was refreshing and very relaxing on the open water of Lake Superior. We even got lucky to spot a black bear on one of the islands, he was just hanging out and relaxing. It just was our lucky day. We would do this again. My husband and I went on the discovery sailing trip and stayed overnight on the sailboat the night prior. The staff that checked us in was informative and helpful. The boat was great- docked extremely close to restaurants, shopping and amenities. The sailing trip was outstanding. Our captain was incredibly knowledgable.

We learned a great deal but all in a very relaxing and enjoyable setting. Any questions we had, he had the answers- be it about sailing, Lake Superior, or the Apostle Islands! We got out on the dingy and rowed up to the islands. It was great to climb the rocks and check them out. We sailed with the spinnaker sail, which was absolutely gorgeous. What luck that the wind worked with us to do that! We enjoyed plenty of time on the front deck with a beverage and the sunshine.

There was an incredible amount of scenery and wildlife to take in. We would highly recommend this company, the discovery trip, the overnight experience, and our captain, Bronte. We will definitely be back!! We had a great time. Brandsen was so fun and passionate about sailing. He let us help with the sails. Numb from shock, the line slipped through her fingers. The dinghy slowly drifted away from the sinking Bluebelle.

Harvey jumped overboard to catch it. Terry Jo watched him swim after the dinghy as he disappeared into the night. She remembered the cork life float kept lashed to the top right side of the main cabin, which was now just barely above-water. She scrambled to the small, oblong float and quickly untied it. Just as it came free, the deck of the Bluebell sank beneath her feet into the ocean. Half crawling, half swimming, she pushed the flimsy float into the open water.

As she climbed onto the float, one of its lines snagged on the sinking ship. For a moment, Terry Jo and the float were pulled underwater as the Bluebelle went down.

Then the line came free, and the float with Terry Jo on it popped back up to the surface. She had no water, no food, and, in her thin white blouse and pink pants, nothing to protect her from the chill of the night. A sudden shower drenched her, and she began to shiver uncontrollably. Soon one thought began to occupy her mind: Where is my father?

The next morning, a Monday, the temperature quickly rose to 85 degrees, and the sun began to scorch her. The small float was beginning to disintegrate, exposing her legs and feet to the sharp teeth of parrot fish. On Tuesday, a small red plane circled overhead. Terry Jo waved at it for a long time with her blouse. At one point, it dived in her direction. She waved frantically, her heart pounding with hope.

The plane passed directly over her, close enough that she could see the details of its underside but at an angle that made it impossible for the pilots to notice her. The chances were slim that someone in a passing ship or plane would spot Terry Jo. Her white float and blouse and blond hair made it impossible to identify her among multitudes of whitecap tumbling over the blue surface of the sea.

The shapes came closer, and she could see they were porpoises. Terry Jo felt oddly comforted by the company.


She said a little prayer of thanks to God for sending them. They remained close-by for hours. Tuesday night brought back the awful unknown in the darkness, but it also brought blessed relief to her body. That night she had a dream. In the dream, she saw her father, seated peacefully with a glass of red wine. Although she had never tasted wine, it looked refreshing, just what she needed to quench her thirst.